Big Story and small stories that add up

The big story was the recent New Yorker article, “The Earthquake That Will Devastate Seattle” that caused quite a stir both here in the Northwest and the rest of the country by providing a very well written summary of what the Cascadia earthquake and resulting tsunami will do to the region.  The smaller stories are the passage of a number resilience bills in the Oregon Legislative and other efforts.  These made barely a ripple in the press but they are historic and show that resilience planning for the Cascadia earthquake is here to stay.  The Legislature created a State Resilience Officer attached to the Governor’s Office who will have the responsibility of tracking the 50-year effort outlined in the Oregon Resilience Plan (ORP).  They significantly increased funding for the Seismic Retrofit Grant Program (SRGP) to the tune of $176 million bond grants for schools and … Read More »

On Tuesday, February 17th, Oregon’s design professional community will be coming together to meet with the Oregon Legislature.  Typically these types of events are a chance for design professionals to talk to legislators about  professional concerns.  This year is a bit different.  The design community is focussing on the passage of the Oregon Resilience Task Force (ORTF) recommendations.  These recommendations range from establishing a Resilience Policy Advisor to the Governor, land uses changes related to tsunami’s, additional revenue for seismic upgrades for transportation, the schools, essential facilities, seismic resilience research, and seismic assessments of Oregon’s energy infrastructure. The ORTF recommendations were requested by the Legislature as a first step to to implementing the Oregon Resilience Plan (ORP), a fifty year plan to prepare Oregon for a Cascadia earthquake and tsunami.

Also unusual, is the extent of the collaboration of the design professional community.  The professional associations of … Read More »

The Trinity Apartments were built in 1910 and are the work of Knighton and Root.  Knighton was the architect of such buildings as the Oregon Supreme Court, the Governor Hotel, and Johnson Hall at UO, to name a few.  The apartments are well built, with much of their historic detail intact.  A courtyard building, it actually two buildings joined in the middle with separate stairs and elevators on … Read More » 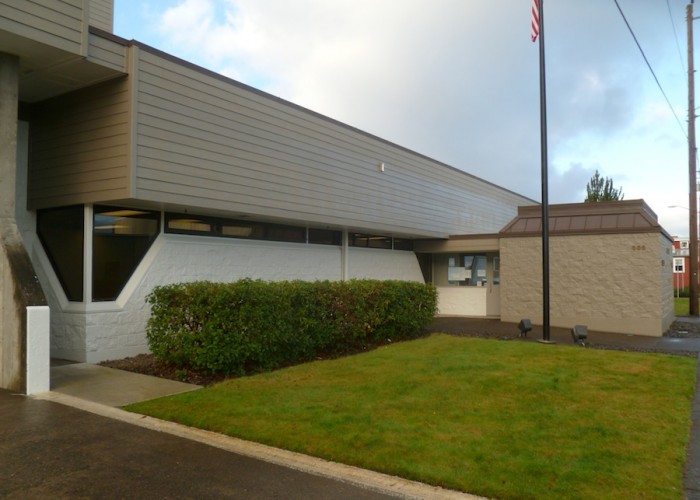 One of the buildings I have been working on recently was the Astoria Public Safety Building , which has been remodeled.  The building serves as a combined fire station and police station.  There was a small addition added to expand the Police Department, and the space was reorganized to be more efficient.  More importantly, the building was seismically upgraded to meet existing essential facility code standards.

The building was built in 1976 and is the work of Brown, Brown & Grider, a local Astoria firm that included Ebba Wicks Brown (the first women to become an architect in Oregon).  The building was built stout enough that the seismic upgrade was fairly straightforward and besides improving connections and tying the roof to the walls, the only visible change was infilling one of the fire station bays.  Locals will notice that the parapet … Read More »