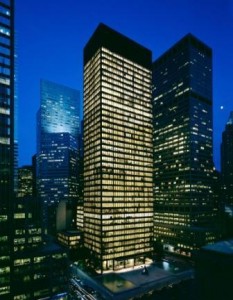 New York City is looking to figure out what to do with their tens of millions square feet of commercial office buildings that were built mid-century.  This is the generation of buildings which that entailed the wholesale destruction of historic buildings which in turned  became a major impetus for the historic preservation movement.  These buildings also were criticized for their negative impact on the urban fabric of the City.   Built in the time of cheap energy, they relied entirely on inefficient HVAC systems that are the are similar to the gas guzzling cars of that generation as well.  The report, Midcentury (un)Modern Analysis of the 1958-1973 Manhattan Office Building, points out that these buildings were cheaply built, consumes large amounts of energy, do not have sufficient ceilings heights, are poorly laid out, and will be extremely difficult to retrofit to make energy efficient and meet current needs.

They are proposing to demolish and replace the buildings with much more energy efficient buildings. As an Arch Daily article points out, this is not without controversy.  The National Historic Trust’s study, The Greenest Building, shows that when the embodied energy of existing buildings is taken into account, the best option for energy savings is typically to retrofit the building rather than replacing.  The New York study actually confirms this, since replacement of the office buildings only improves the energy savings of the buildings by 5%, which would take over 148 years to pay back.  Their solution is to increase the size of the replacement buildings by 44%.  It is a bit of mixing apples and oranges, but it does put the development within a dense urban environment and infrastructure which is more energy saving than sending this development out into the suburbs.  Maybe this could be included as a type of carbon credit?

What is an historic preservationist to do. Having set up a rational system to preserve historic buildings we legitimately must accept midcentury modern buildings, since some of them are architectural, culturally, and historically significant (and now being featured in Mad Men). While they are energy guzzling hogs, and perform worse than the traditional buildings they replaced, the environmental thing to do is to save them.  Historic preservation doesn’t mean to save all old building, but the new reality (until we get global warming under control) is that energy retrofits should be the preferred option. 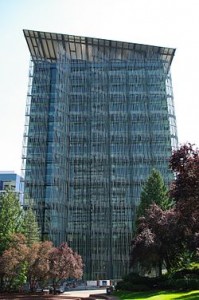 One example that New York could follow is just being completed in Portland.  It is the Edith Green/Wendall Wyatt building, a 35 year old building, fairly non-descript building, designed by SOM.  The structure of the building was kept and a new skin attached and the building is LEED Platinum.

One thought on “Mid-century dilemma”

One thought on “Mid-century dilemma”