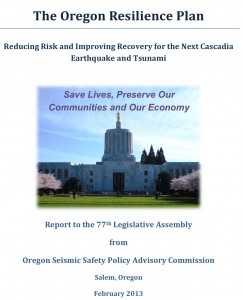 The  Oregon Resilience Plan was adopted by OSSPAC and will shortly be on its way to the Legislature.  OSSPAC was tasked by the Legislature with developing this plan in 2011, and with the help of over 150 volunteers, divided into 8 task groups and an advisory committee, produced a report that takes a comprehensive look at the impacts of a Cascadia earthquake and tsunami will have on Oregon, and makes recommendations to reduce that impact. The draft report and the executive summary are available from Oregon Emergency Management (OEM).

The report builds on a conceptual framework developed by the San Francisco Planning + Urban Research Association (SPUR) and a similar effort in the state of Washington.  This framework includes looking at impacts of a scenario 9.0 Cascadia earthquake on business continuity, critical buildings, transportation, energy, water/waste, telecommunications, and the coast.  It looked at current conditions, tried to understand interdependencies between each of the sectors, and then established goals over a 50 year time frame.  The fifty year time frame was chosen based on the example of Chile which had successfully made similar preparations for a subduction zone earthquake over that period.  It was also felt that this would spread costs over a large enough time frame that it would have minimal economic impact.

For those interested in hearing more about the report, the report will be heard by the Veterans and Emergency Preparedness Committee (date and time to be announced) and there will be a press release on March 11th, the anniversary of the Tohoku earthquake and tsunami in Japan.

The report is sobering in outlining the impacts the Cascadia event will have, but hopeful in outlining steps we can take. The most important step is deciding to move forward. The next step is undertaking comprehensive assessments of the key structures and systems that underpin Oregon’s economy.  From that, we need to launch a sustained program of capital investment in Oregon’s public structures. To encourage Oregon’s private sector, we need to craft a package of incentives to advance seismic resilience.  Finally, we need to update Oregon’s public policies, so that resilience is incorporated into the day to day decision making.

It may seem difficult, in this time of economic turmoil, to take on a new goal.  However, the Cascadia event will happen and will not happen when it is most convenient.  We know what we are up against, and future generations will judge us on our decisions.