The following is a repost of a Facebook post done Tom Horning, a geologist and city councilor, who lives in Seaside, Oregon and has been a long time advocate for preparing for a Cascadia earthquake and tsunami. He granted me permission to get it out to a wider audience:

The GREAT AMERICAN SHAKEOUT occurred in Seaside at 10:18 AM. A few seconds of modest seismic shaking was followed by 3 to 5 minutes of violent wracking that knocked the terracotta roofing off of City Hall and collapsed the brick bell tower of the fire station onto the fire trucks in their parking bays. 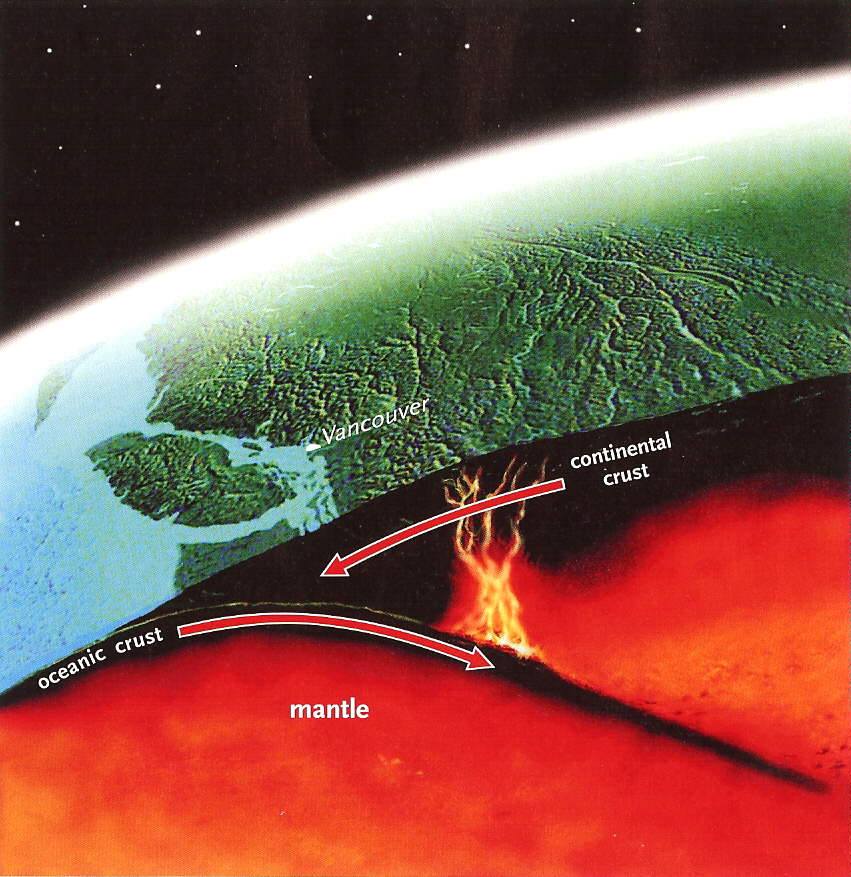 The Cascadia Subduction Zone has been locked in its shallowest part near the ocean shore for the last 318 years. Full rupture earthquakes have occurred about every 330 years, on average, for the last four ruptures. It appears that we are still in the cluster.

Seven of eleven bridges in Seaside collapsed when the soils liquefied during the shaking, preventing panicked crowds of tourists and locals alike seeking safe evacuation routes. A few young people swam the rivers or picked their way over the shattered concrete to safety. Four bridges that had been replaced around 2002 withstood the shaking and provided safe and timely evacuation, although areas with riverbank fill spread laterally, rupturing several streets and further delaying evacuation.

Fifteen minutes after the shaking ended, the predicted tsunami began creeping up the beaches. By twenty minutes, seawater was flowing over the Prom. By thirty-five minutes, water was roaring through
the third story windows of motels on the Prom, in buildings that did not collapse from the shaking.

Flood waters were 40 ft deep at Highway 101 and Broadway. Ninety percent of the houses and buildings in Seaside were destroyed by the first surge of the tsunami. Much of the debris floated out to sea as the tsunami withdrew but returned violently with the next surge, knocking the remaining structures down and killing people who took refuge in masses of floating debris.

All of Seaside west of the rivers was washed away by the tsunami. Only the bridges at First Avenue, east Broadway, and the two 12th Avenue Bridges survived the shaking.

Documented fatalities for Seaside and Gearhart totaled 3,927 souls, mostly elderly, the very young, and visitors. Of these, about forty percent of the citizens in Seaside were killed, largely because of the lack of safe evacuation bridges. The primary cause of death was drowning, although many people died after the disaster due to crush and impact wounds, sea water ingestion, and hypothermia. The total loss of life was nearly three times that of Hurricane Katrina and more than those killed in the World Trade Center collapse. The totals could have been many times higher had the earthquake struck during summertime. 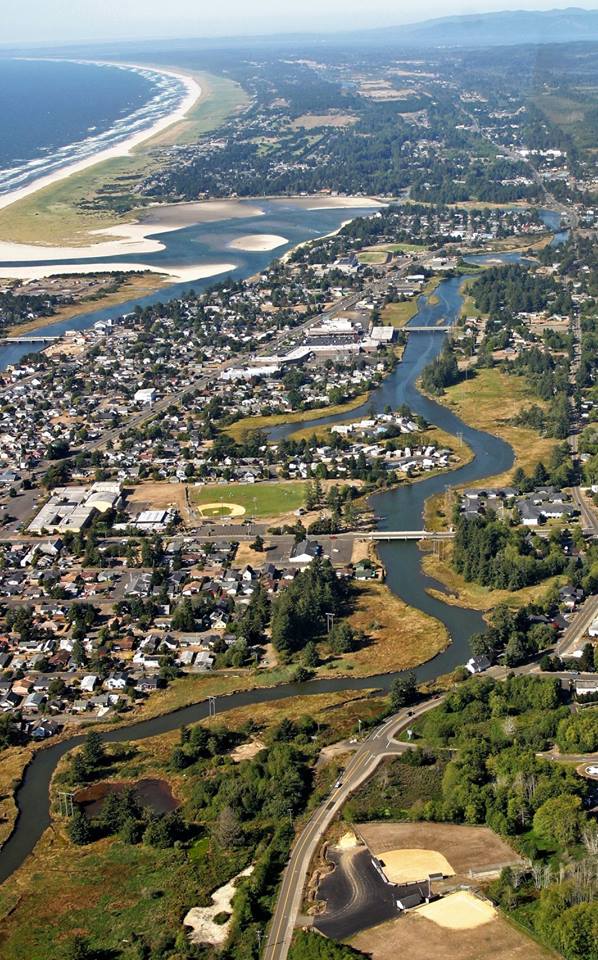 Evacuation over the rivers is necessary to avoid the tsunami flooding. The short channel on the west side of Neawanna Creek, just north of Broadway Park, was cut by a tsunami 1300 years ago.

Only about 15 percent of Gearhart citizens died, the number limited by easy evacuation access to the high dune in the west part of the city. However, many suffered from hypothermia because house fires consumed many of the surviving buildings in the west dunes, exposing them to rain. Fire and emergency medical equipment were ruined by salt water immersion, because the old station had not been relocated to high ground, as advocated by city staff and a citizen’s committee. Similar fires spread through the Sunset Hills neighborhood of Seaside. Fortunately, the nearby new school complex was able to house the refugees and offset the effects of weather and low nighttime temperatures.

The coast was isolated for several weeks, as the nation mobilized to render assistance. The coast suffered the worst loss of life of all communities in the Cascadia region. Clean water and food, sanitation, and medical supplies were in short supply. Surviving homes were used to house survivors under difficult circumstances. Seaside and Gearhart suffered more than $1.2 billion in lost real estate values. Damage to utilities is still being evaluated, but it is likely that the entire infrastructure will need replacement.

As expected from several decades of research, the tsunami left sheets of sand in the marshes and forest as evidence of the flooding, whereas vertical changes in land elevations, totaling 5 ft, caused shoreline forests to drop below wave base and die from saltwater poisoning. Local beaches and dunes have washed away, the shoreline retreating nearly 800 ft eastward as ocean processes redistribute sand into seafloor depressions created by changes in land elevations. During the 5 minutes of shaking, the land rebounded elastically to the southwest by as much as 55 ft. 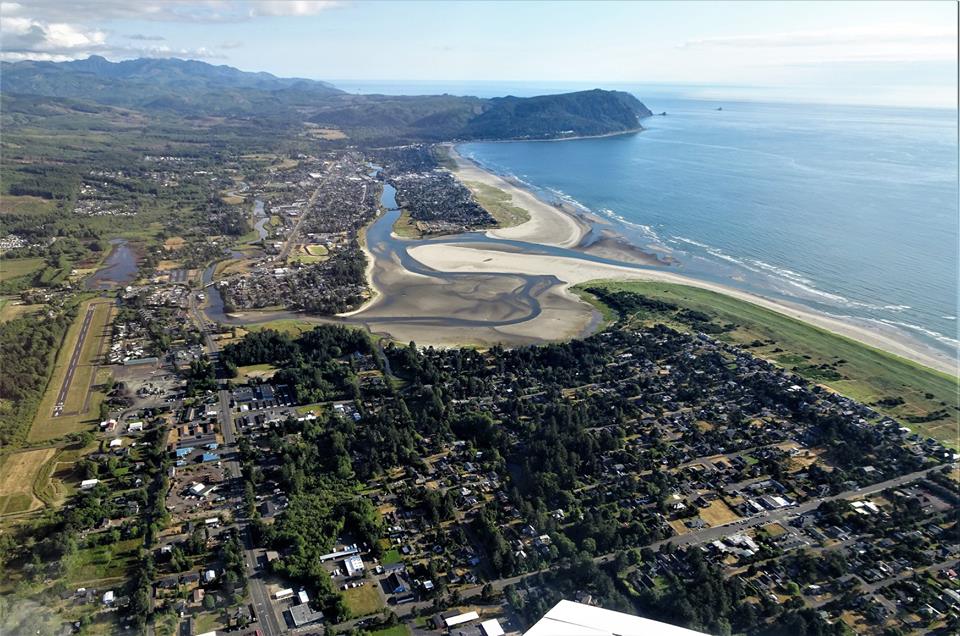 Most of the houses in this photo were destroyed by the tsunami. The tsunami hit shore about 20 to 25 minutes after the onset of shaking.

Claims of malfeasance and ineptitude against community leaders have been leveled by families of survivors. Efforts to fund the construction of new bridges with room tax increases were opposed by the lodging industry. Few sources of other funding had been appropriated by state or federal agencies for hardening coastal infrastructure. Delays in delivering assistance have been significant. Many additional deaths from injuries and lack of appropriate medicine have occurred. Most agree that it may be several years before the cities can begin to rebuild. All agree that the coastal communities should have been better prepared. 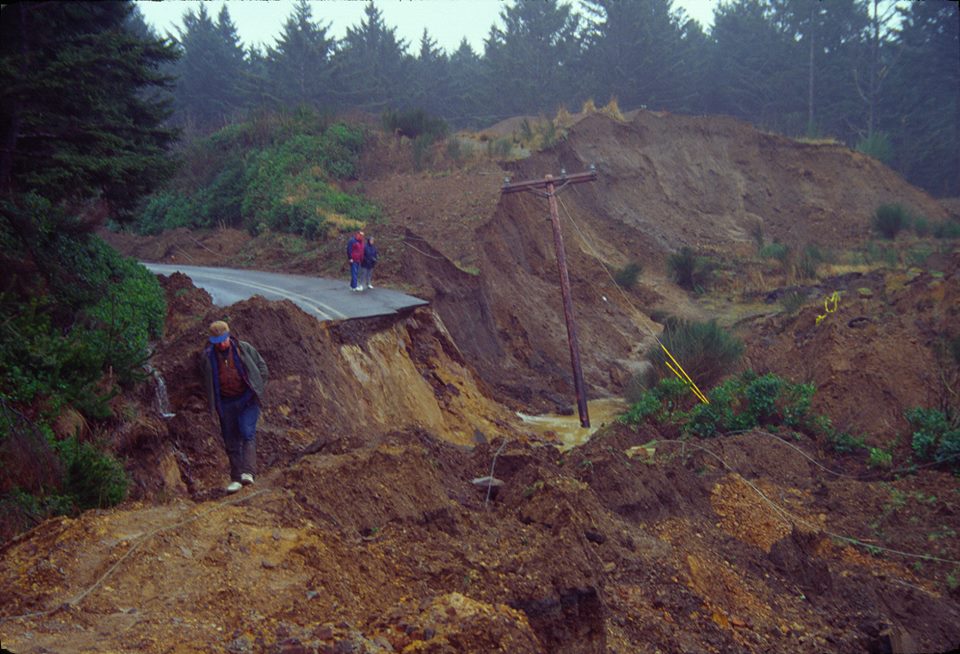 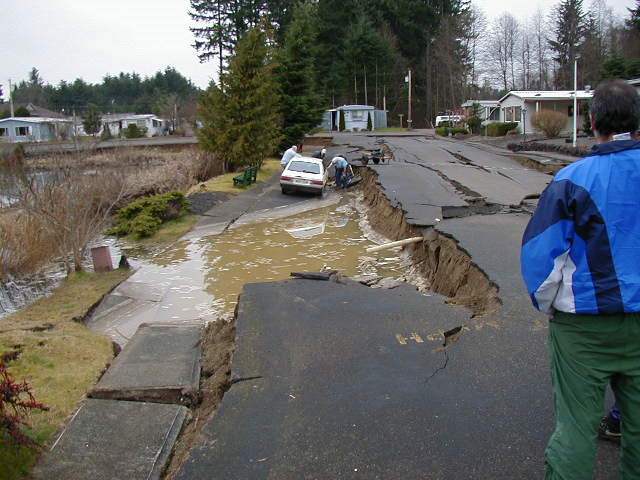 Fill that was used to build in natural waterways is prone to liquefaction and lateral spreading.

Shaking of improperly designed bridges causes them to fall apart. This hinders their use as evacuation lifelines. 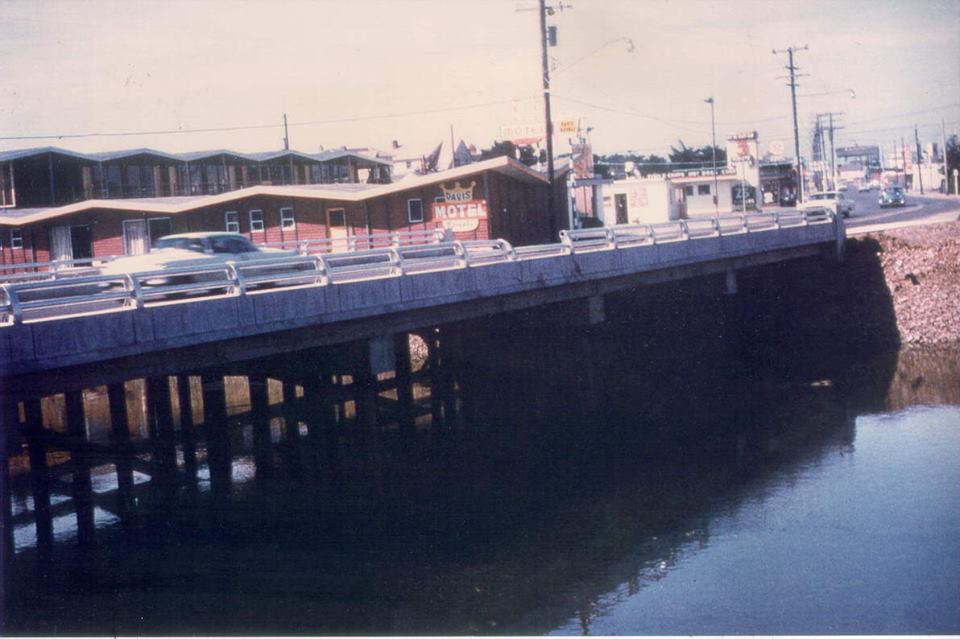 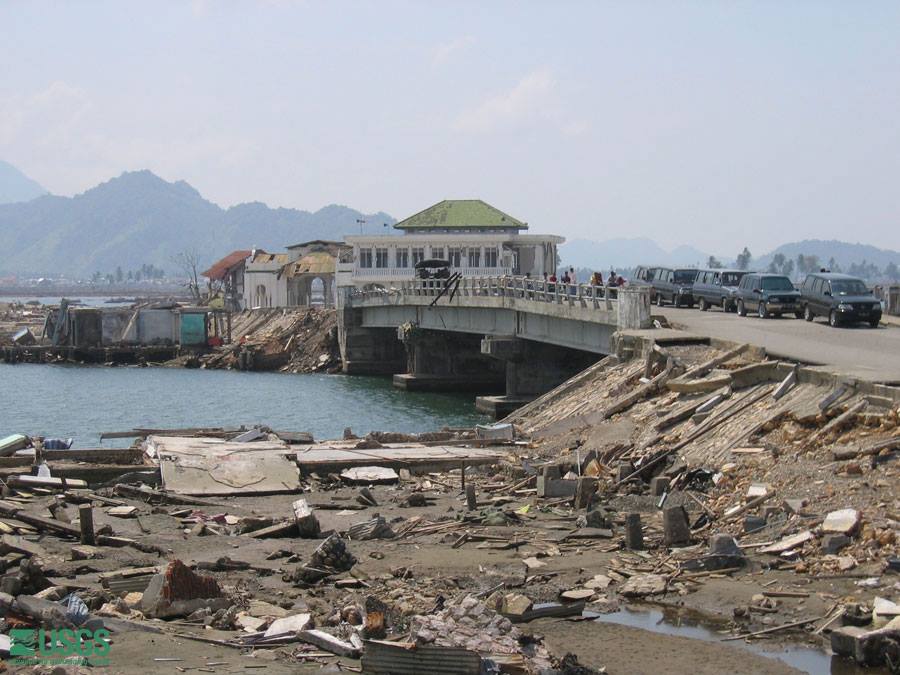 Well built bridges withstood both the earthquake and tsunami. These were important for reaching survivors and recovery from the damage. 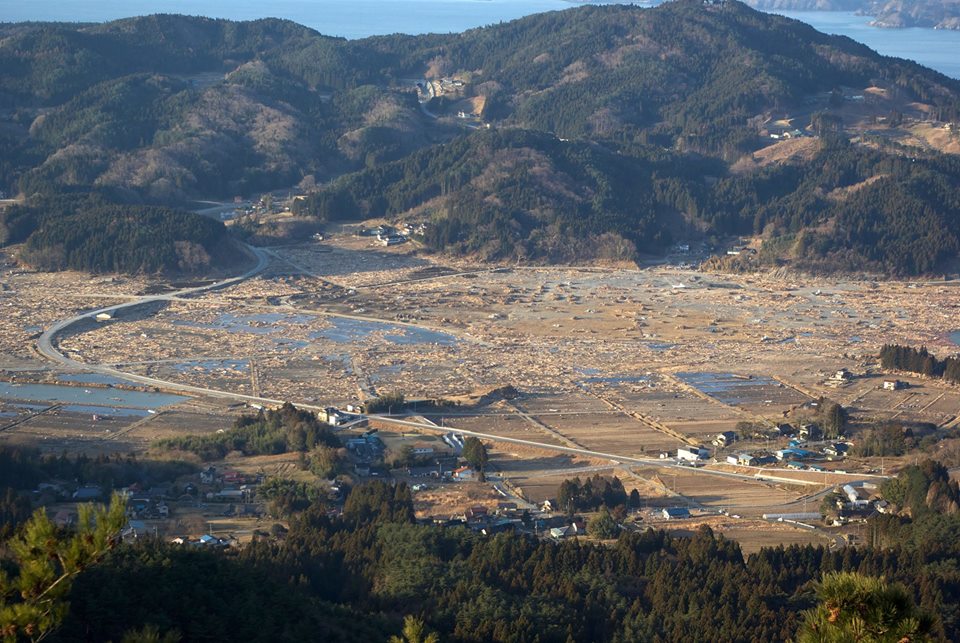 Wood buildings were easily swept away by the tsunami. Ninety two percent of the houses in Seaside were destroyed. 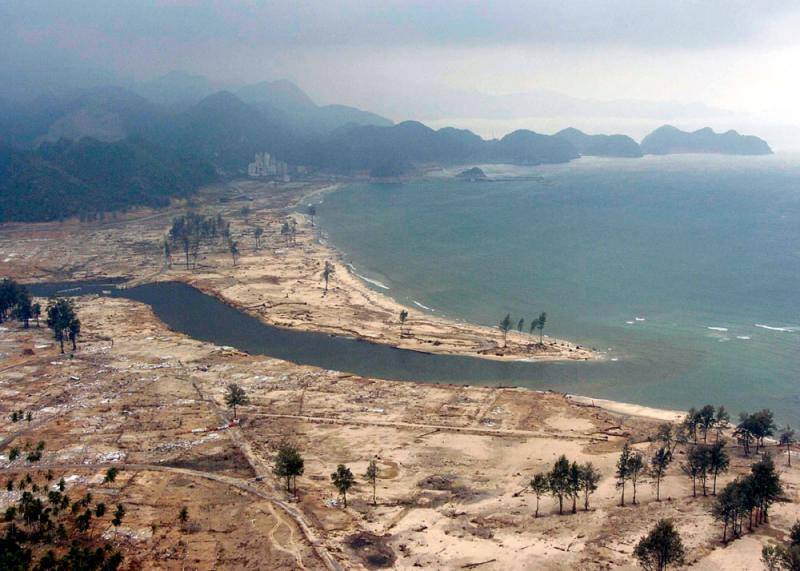 Like Rikuzentakata, Japan, Seaside was largely obliterated by the tsunami. Only those who were prepared and practiced were able to evacuate in time. 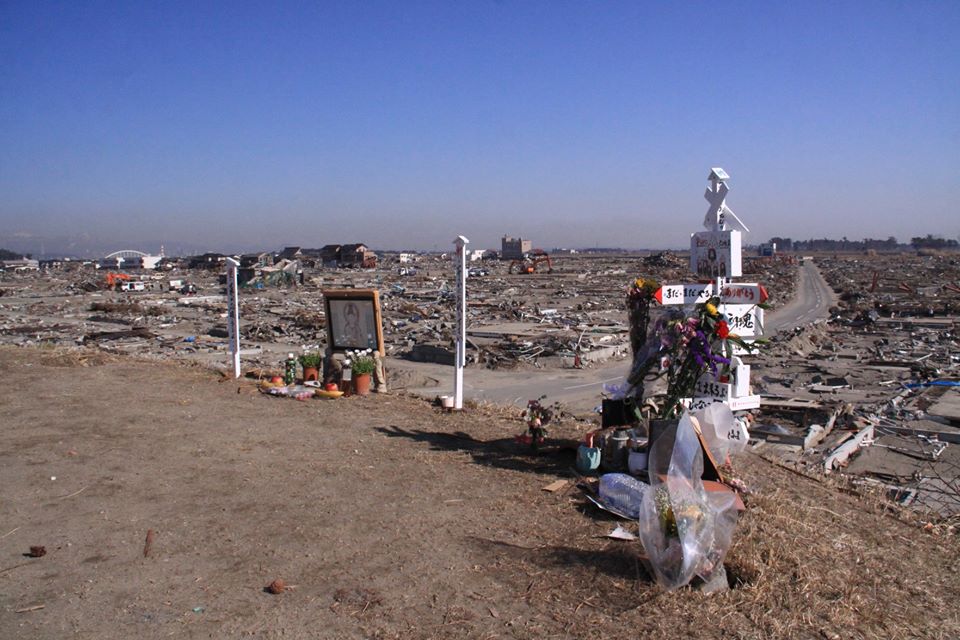 Low areas were swept clean by the tsunami. 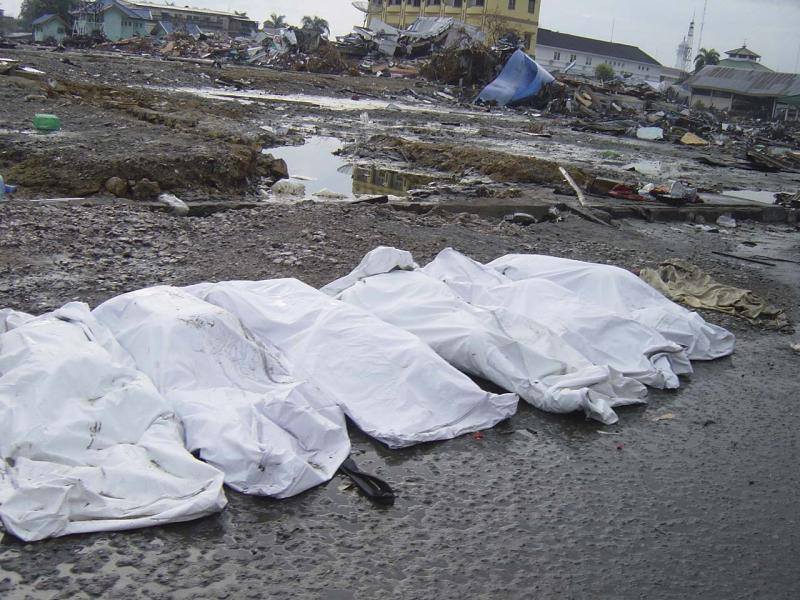 A few of the unlucky and unprepared.

Tsunamis usually deposit sand in swampy areas where clay and silt normally are laid down. Brian Atwater shows where dark peat has been buried by tsunami sand, then is later covered by clay-silt. This sequence of sediments indicates that the land has subsided vertically by perhaps as much as 5 ft 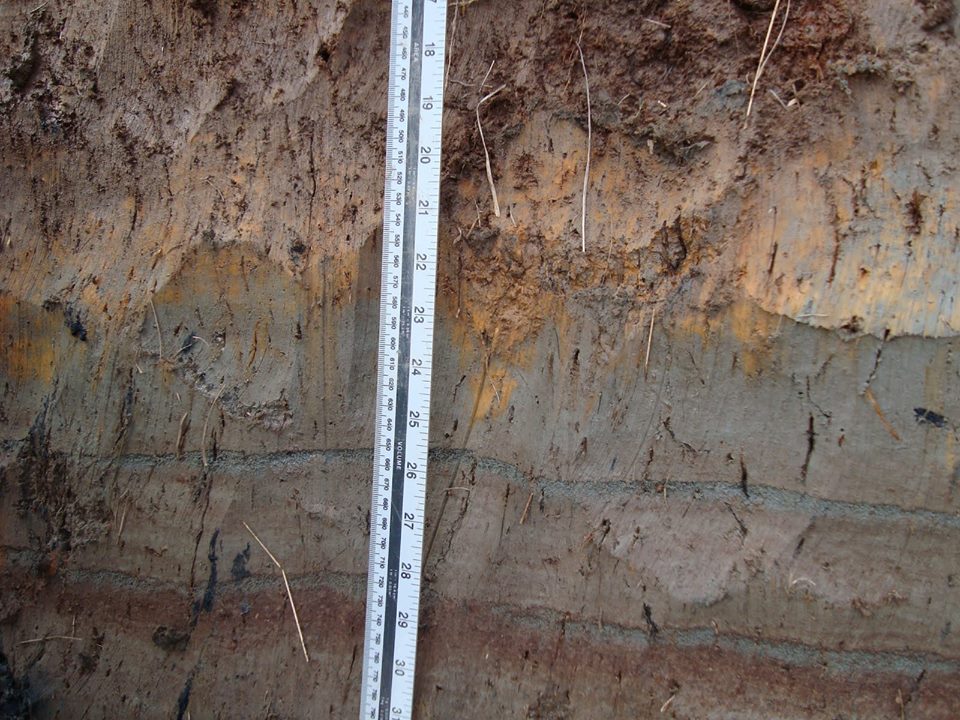 A closer view of tsunami sand layers, appearing as light-gay bands at 25.5 and 28.5 on the scale. Sand thickness is not an indicator of tsunami size. 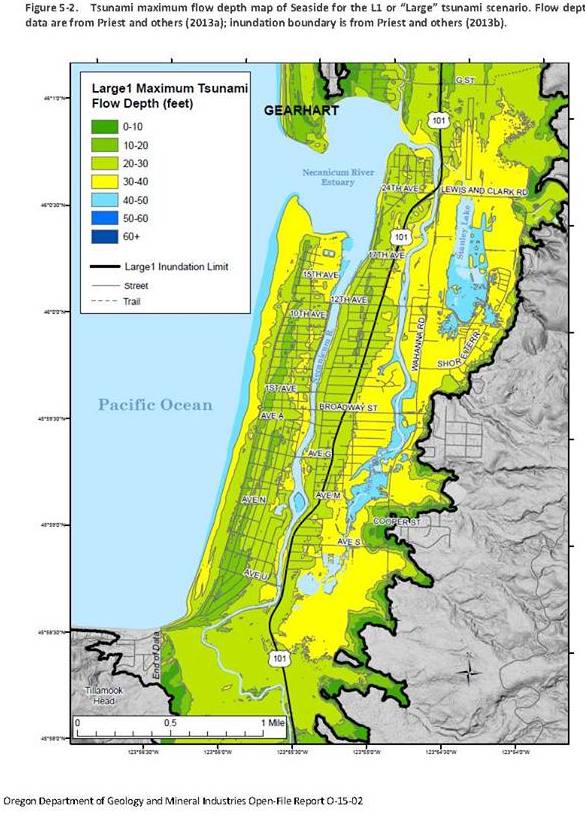 The water depth map for the tsunami that wiped out Seaside. Water 3 ft deep can drown a person. Tsunamis usually deposit sand in swampy areas where clay and silt normally are laid down. Brian Atwater shows where dark peat has been buried by tsunami sand, then is later covered by clay-silt. This sequence of sediments indicates that the land has subsided vertically by perhaps as much as 5 ft. 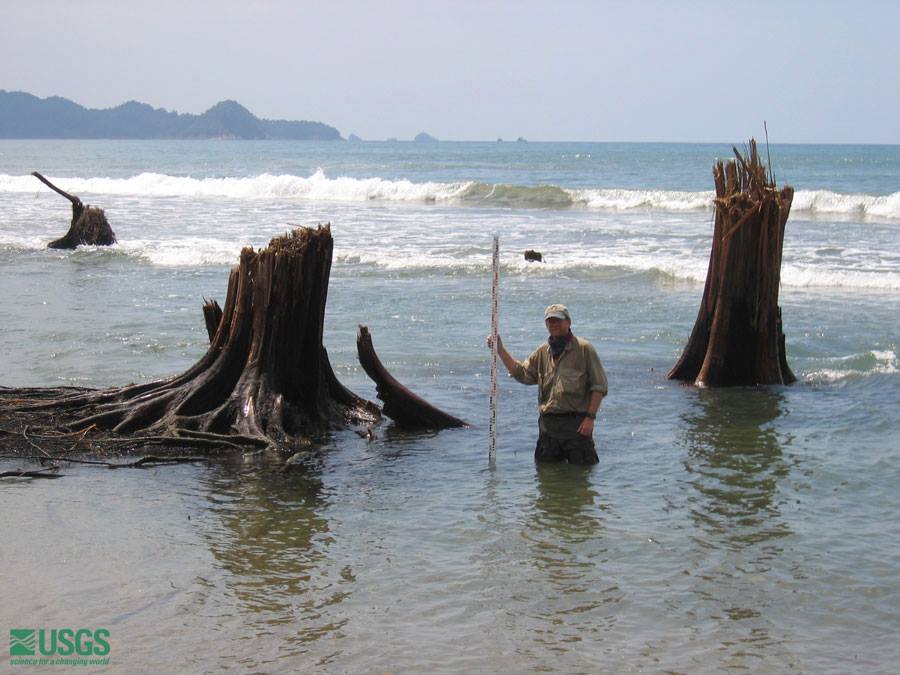 Trees snapped off by the tsunami and drowned in the surf by subsidence of the land beneath the waves. 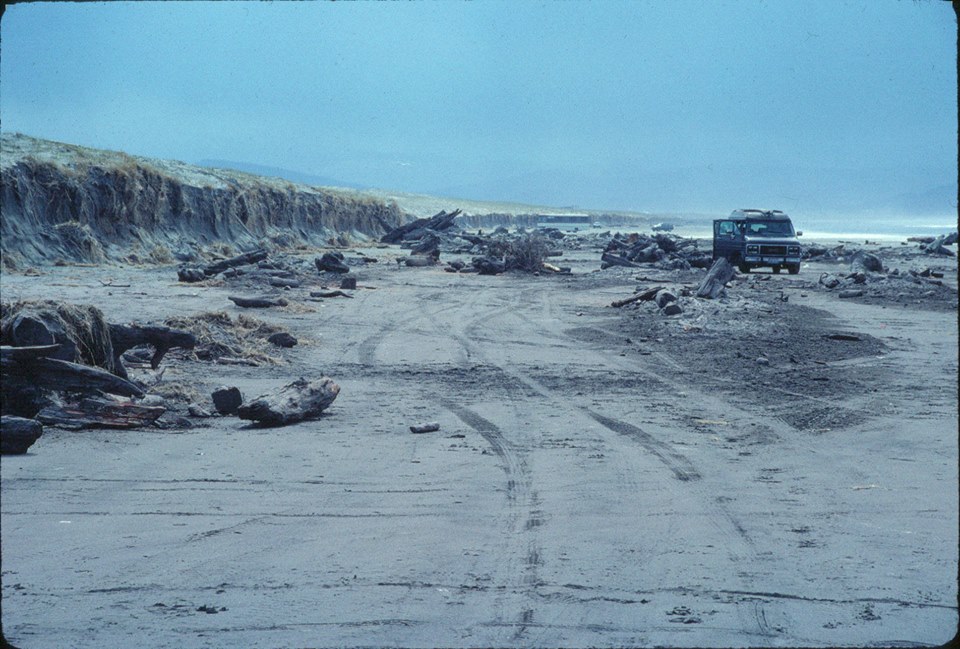 Dune backed beaches are eroded back by surf due to changes of several feet in the elevation of the land. As much as 800 ft of shoreline retreat can be expected for 5 ft of subsidence. Cliffs will be cut into the dunes as the sand is carried out to deeper water.