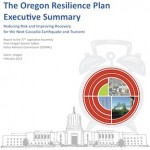 earing a milestone in preparing for a Cascadia earthquake and tsunami, but it could be delayed for lack of funding (see this report from OPB).  The Legislature, back in 2011, asked Oregon’s Seismic Commission (OSSPAC) to create a resilience plan, which it did with the help of 169 volunteers from across the State. The Oregon Resilience Plan (ORP) took the bold step of saying that Oregon can become resilient within 50 years, which the Legislature took seriously and established the Oregon Resilience Task Force to hone down the over hundred recommendations to a manageable first step.  The Task Force made its recommendations and the Legislature passed bills based on these recommendation.  However, these bills need funding and they rest in Ways and Means Committee, which will decide their fate.

It is hard to overstate the impact of the Oregon Resilience Plan.  It represents one of the few instances where a state has planned for a disaster before it occurs, and this has made others take notice.  The ORP is one of the base documents for the National Institute of Standards and Technology (NIST) “Community Resilience Planning Guidelines”, which will set national standards and codes.  In Oregon, communities, state agencies, and service districts are already incorporating elements into their planning. However, there is much the State needs to do and this is reflected in the legislation.

The bills in question are HB 2270 (which creates a State Resilience Officer), SB  94A (addresses energy infrastructure vulnerabilities, requires local coastal government to do resilience planning, lift helicopters, and promotes public/private partnerships and funding for preparedness projects), SB 808A (creates Task Force to look at mass care after a disaster, and HB 3447 (directs LCDC to develop guidelines for tsunami resilience planning).  These are important first steps and funding them is the smart choice.