A major recommendation of the Oregon Resilience Plan was the establishment of resilience ratings for building and communities.  The idea was to let people and communities know how well a particular building, structure or community would perform in the Cascadia Earthquake.  The goal was to  help people make informed decisions about the acceptable level of risk.  These rating systems are now being to appear.  The United States Resiliency Council (USRC) is releasing its Building Resilience Rating System this fall.  The rating system is completed and the USRC are now in the process of recruiting structural engineers to become certified to perform the rating system. Their rating system has three components: Safety, Cost of Repairs, and Time to Regain Function.   Depending on performance,  a building will get ratings from one star to five star.  Similar to a LEED Rating, this information will be shown … Read More »

Although it focuses on the three ASCE members involved in the effort, I was also worked on the project as a sub-consultant for SEFT, Inc.,  Kent Yu’s firm. Kent led the the Oregon Resilience Plan effort when he was chair of the Oregon Seismic Safety Policy Advisory Committee (which … Read More »

OPB has been doing an incredible integrated radio, TV, and online effort, called “Unprepared”, looking at the vulnerability of the region to a Cascadia subduction zone earthquake and resulting tsunami. The finale will be an airing of the Oregon Field Guide Special Unprepared Documentary.  The premier showing will be October 1, 2015 at 6:10 pm.  For those wanting a sneak peak and to participate in a question and answer session, the local chapter of the American Society of Civil Engineers (ASCE) is putting on an event at Mercy Corps at 6:00 pm, Thursday, September 24th, at Mercy Corps.

The recent subduction zone earthquake in Chile was an 8.3 magnitude which puts it in the “Small Size” Cascadia earthquake category. Since the ruptures start from the south, the rupture would stretch up northern California to Oregon.  While not as powerful as a full rupture that would continue … Read More »

I have been trying to get the architectural community more involved in the preparing for the Cascadia earthquake/tsunami and resiliency.  The American Institute of Architects (AIA) was at one time very involved in emergency preparedness and in the 1970’s help come up with the response-relief-mitigation cycle.  In recent years, the AIA had lost interest in the topic and even been cutting back institutional support for the topic.  This is finally turning around, both locally and nationally.  The Portland AIA has taken an strong interest in the seismic upgrade of schools.  The New York AIA has become aware of resilience following Hurricane Sandy and created a program called Post Sandy: Creating a Resilient New York.

The national AIA is now taking a more active interest and starting the shift to resilience, led by Cooper Martin.  I had worked with Cooper on an … Read More » 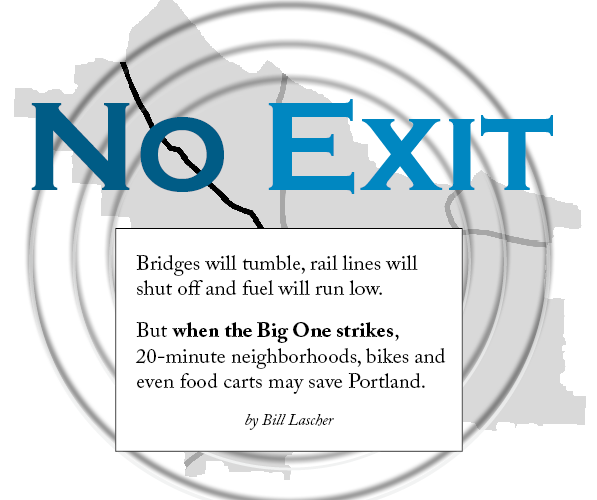