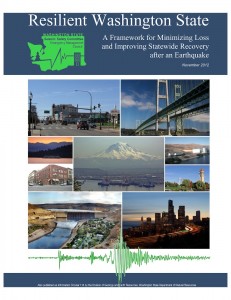 The State of Washington has released its final report for the Washington Resilience Plan.  This plan also drew its inspiration from SPUR’s Resilient City report for San Francisco.  Since they started their effort before Oregon did, we also drew on the work Washington was doing.  These two state reports are complementary and provide a basis for future collaboration between the states on becoming resilient. To touch on one area, almost all of Oregon’s liquid fuels comes from refineries in Washington in the Puget Sound area.  These refineries, the pipelines that bring the fuel to Oregon, and the fuel storage tanks located in Portland are all at risk during an Cascadia earthquake. Solving this problem needs both States working together along with the other stakeholders to solve.

This collaboration needs to be extended for almost all sectors.  Cascadia is regional event and reaches from northern California to southern British Columbia.  The differences are not so much by state but run vertically through the region, with tsunami inundation zone, coastal zone, central valley area, and eastern area facing similar problems.