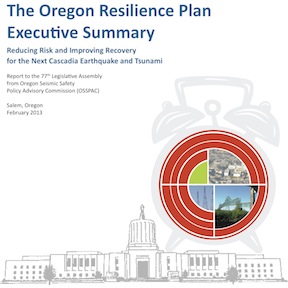 The Oregon Resilience Plan was presented to the Joint Veterans and Emergency Preparedness Committee today.  It is a significant achievement and the start of a new era in Oregon’s efforts to prepare for the Cascadia Earthquake/Tsunami.  Sen. Boquist, the chair of the committee, told OSSPAC, that this the initial overview meeting and the first of many, in which they would examine each chapter of the plan in detail with the goal of finding which recommendations could be implemented this session.

Kent Yu and Jay Wilson, the chair and vice-chair of the Oregon Seismic Safety Policy Advisory Commission (OSSPAC), did the presenation.  They reviewed the origin of the plan, which began with an op-ed in the Oregonian written by Yumei Wang, Edward Wolf and myself which suggested a 10 year resilience plan to prepare for Cascadia.  This was taken up Rep. Deborah Boone who crafted a House Resolution, HR-3 The Oregon Resilience Plan, which passed unanimously and directed OSSPAC to develop the plan.

The plan, which is conceptually based on the work SPUR’s, The Resilient City, which looked at making San Francisco resilient from earthquakes. For Oregon, the plan looks at making Oregon resilient in the face of a Cascadia 9.0 earthquake.  It is the work of 169 knowledgeable professionals, who donated their time and experience, and worked in 8 task groups.  The Scenario Task group provided detailed information about the Cascadia earthquake and resulting tsunami.  The Business Continuity Task Group, early on determined that business could last about 2 weeks, maybe 4 weeks before they would either close or relocated following the earthquake.  This set the goal which all groups worked towards. The groups included Critical Buildings, Transportation, Energy, Telecommunications, and Water/Waste which looked at specific critical lifelines.  In addition, there was a Coastal Task Group which focused on the impact of the tsunami and earthquake on the coastal communities.

The main recommendation presented by Kent and Jay was the creation of a State Resilience Office that would be tasked with coordinating resiliency efforts in the State, creating a state preparedness/resiliency rating system, and making regular reports to the Legislatures to keep track of progress.

Additional perspectives on the need for the Oregon Resilience Plan were given by a number of parties. John Dodier, the facility chief of Portland’s VA Medical Center, indicated that while they are continuing to improve their disaster continuity plans, the could only last a short time before utilities would need to be restored.  Marilyn Nikolas, the president of Oregon Continuity Planners Association, stressed the need for continuity planning of business and government.  Sue Graves, the safety coordinator of Lincoln County School District, told the story of how the school district went from denial of the earthquake/tsunami risk, to now successfully relocating their three at-risk schools out the inundation zone.  Finally C.J. Sylvester, the chief operating officer of the Portland Public Schools and Edward Wolf, a citizen active in promoting seismic safety in schools, told the story of the PPS effort’s to seismically upgrade their schools, with the latest effort the bond issue that just passed. They also stressed the importance of the School Seismic Grant Program that was passed by the voters.

Of major impact was the testimony representatives of Pacific Power, Portland General Electric, and NW Natural who all supported the ORP and told of their efforts in increasing seismic resilience of their systems.  However, they expressed concern about getting some liability waiver before proceeding with in-depth vulnerability assessments.

Maree Wacker, the Regional Chief Executive Officer of the American Red Cross, told the committee that they support the Oregon Resilience Plan and discussed how the plan complements their efforts.

Finally, representatives form DOGAMI, DLCD, and ODOT indicated their understanding of the ORP, how they contributed to it, and how they are ready  to help with implementation.

Oregon is once again being a leader.