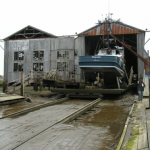 I often write about the dangers of a Cascadia earthquake since it will, among other things, damage the historic buildings I have come to know and love.  I also help with preserving these historic buildings from more prosaic risks.  As a regional advisor for the Historic League of Oregon I participate in the review of applications for projects seeking to be listed on HPLO’s list of Oregon’s Most Endangered Places.   This effort seeks to identify those historic buildings or places that are particularly at risk and could use help to turn things around.

The coast is well represented on this years list, with the Astoria Marine Construction Company and the Tillamook Air Museum.  The Astoria Marine Construction Company is still a working boat yard and an integral part of the Astoria’s economy and lore.  The Tillamook Air Museums is one of the largest wood structures in the world and was built to house blimps during World War II.  It now houses the Air Museum (which has a photo that shows a plane flying though the hangar from one open door to the next!).  I am especially pleased that these are utilitarian structures and speak to the importance of these types of buildings in our architectural heritage.

Being listed on the Oregon’s Most Endangered List means that they get help from HPLO to help save the buildings and get public attention that these architectural and historic treasures deserve.